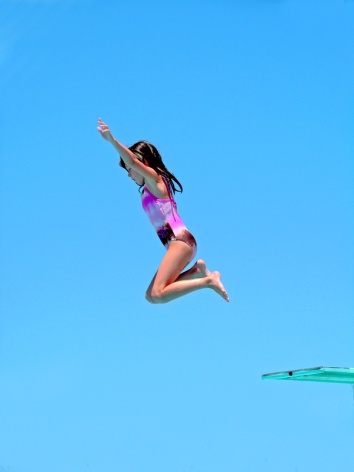 As a child, brothers are the bane of your existence.  At times it can seem like they exist for the sole purpose of making you crazy.  I grew up with  4 brothers.  I would joke sometimes that that was four too many.

One day when I was about 5 years old, my second-oldest brother, Rick, convinced me it would be fun if he lay on the floor on his back with his feet up and I should sit on his feet while he catapulted me through the air across the room.  “It’ll be fun,” he said.  Seemed legit to me.

Well, he was right.  It was fun for the one and a half seconds that I was in flight.  When I hit the ground I slid across the shag carpet and into some furniture.  My brother thought that that was really cool.  “You went really far,” he said.  I had scabs on my elbows from that incident that were the size of hamburger patties.

Brothers aren’t usually the voice of reason.  So it really takes you off-guard when they actually have something legitimately profound to say.

When we were making the decision to adopt, it was a no-brainer.  We had decided before we were married that we would like to have one biological child and that we would adopt a child, so our hearts were open to adoption right from the start.  As our married life went on, we began to come to terms with the fact that I was not able to carry the babies to term.  So, we knew that if we wanted to be parents, adoption was the only route that we could take.

We went through the adoption paperwork and interview process that took quite some time, and had finally gotten to the end of it.  We had an appointment in two days to turn in the last little piece of information that was needed, when we received a life-changing call from our social worker.  I answered the phone and she told me that she had received a file that she thought would be interesting for us.  I figured that she had finally found a baby or toddler for us.  Instead, she asked me if we would consider three children.

“Did you say three children?” I asked, “because I’m not sure I’m ready for that.”

“That’s really cool,” he said, “Did you tell her we’d consider it??  I knew deep in my heart that I was in deep trouble.  My husband wanted us to adopt three kids.

It took me a long time to make the decision.  I didn’t think I could do it.  I thought of all the reasons why this would be really, really hard.  I thought of the things we would have to sacrifice, and selfishly, of the potential that three hurting children could have to make my life extremely miserable.

Then I called my brother in Mexico.

I’m not sure why I decided to ask him for advice, because I already knew what he would say.

Currently, Rick and his wife, Lisa, are caring for orphans in Mexico at “Casa Possibilidades” in Linares.  They had gone from Canada to Mexico on a mission trip, and when they saw the need there, they were profoundly affected by it.  They returned home, but left their hearts behind with the orphans.  A while later they packed up their family, sold their house and took their boys and whatever they could back to Mexico.

I talked with them for a while about it, going over some of the fears I had, and Rick said something that changed my life.

“When it comes to things like this, you gotta give your whole self to it.  You gotta go all-in.”

Well, that was it.  I got off the phone and when I hung up the Lord spoke to me clearly. He said, “I’ve never asked you to give your whole life to something before.”

As a Christian, we don’t get the excuse that it might be hard or uncomfortable.  Jesus is all about making us do uncomfortable things.   Scripture tells us that the same Spirit that raised Christ from the dead lives in us.  It’s when we are living outside of our capability and relying totally on His power at work in us, that we can do the most unimaginable things.